They say 75% of all the podcasts ever created are now dormant, and that 50% of all new podcasts never make it past 10 episodes. Thanks to you folks (to the tune of 85,000 downloads), Chasing the Horizon is sitting pretty at Episode 50, which you can listen to right from this page:

I won’t pummel you with statistics here, but you can find out all about how grateful I am for all your support (and listens) in Episode 50. 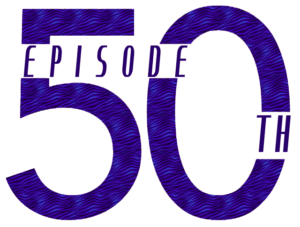 SAY IT WITH ME ONE MORE TIME: EPISODE 50!

If you’d told me in April 2017 when I first got the idea to start a podcast that less than two years later I’d be staring down the barrel of the 50th episode of that show, I’d have probably laughed at you. Yet here we are, 50 episodes in.

That means guests, guests, guests – 50 of them over the first 49 episodes by my count (one episode had two guests, remember?). Some of those folks I knew before, but a good chunk of them – over half – I’ve never met face to face (yet).

When I set about trying to figure out who I wanted to be the guest on Ep 50, at first I thought it needed to be somebody special. I’ve kept a list of my dream guests from the very beginning – Alonzo Bodden having been one of them – and I reached out to a few of them. I even made it past a couple of their PR people and am in discussions to feature them on future episodes, though I’m not holding my breath.

Then it occurred to me – I’m so pleased at having reached 50 episodes, let’s celebrate the show by featuring some of our previous guests. When I chat with them over the internet/phone, you always hear me thank them for being on the show and saying goodbye. Sometimes that’s it, I ask them to send me some photos and we get on with our lives.

Other times, we keep talking. Every now and then, I’ll think of something I didn’t ask earlier, or they’ll elaborate on something or tell a story that popped into their head. Occasionally I’m able to edit those things back into the main discussion (something I did recently with Travis Wyman), but most of the time it would just wreck the flow of the conversation.

That’s how I thought of it, sort of. It was the occasion of selling my KTM 990 Adventure, a bike I spoke with one of the guests. I remembered he told me he thought I was really going to dig the engine on that bike – and I did!

What you have in Episode 50, then, is a clips show, but instead of it being greatest hits from previous episodes, it’s material that got left out. You’ll hear from

There is motorcycle industry news, of course, because it’s not really Chasing the Horizon without news. Triumph is bringing back their largest production motorcycle, the Rocket 3, but only making 750 of them. Everybody knows by know I ordered an Indian FTR 1200 S awhile back, but you may not know (even though I predicted it!) the rumors about the FTR’s engine showing up in other bikes from Indian (oh, plus something about their fixed-fairing heavy touring cruiser, but yeah, I talked about that before). (PS The first person to send me an email to podcast@bmwmoa.org with the episode number in which I predicted the FTR engine would appear in other motorcycles wins a special prize.)

Harley-Davidson is going back to school, and Ducati has released its very first fully electric …scooter. Find out what is truly surprising about it by checking out this episode.

I can’t thank you enough for listening to Chasing the Horizon. If you haven’t listened to all 50 episodes yet, I hope you’ll go back and check out the ones that came before you found the show. Maybe I’ll do another clips episode for the 100th show – stay tuned to find out.