Legendary MotoGP racer Randy Mamola will take the grips on a modified Indian Scout Bobber to race the full length of the upcoming Sultans of Sprint series according to a press release sent out by Indian Motorcycles. 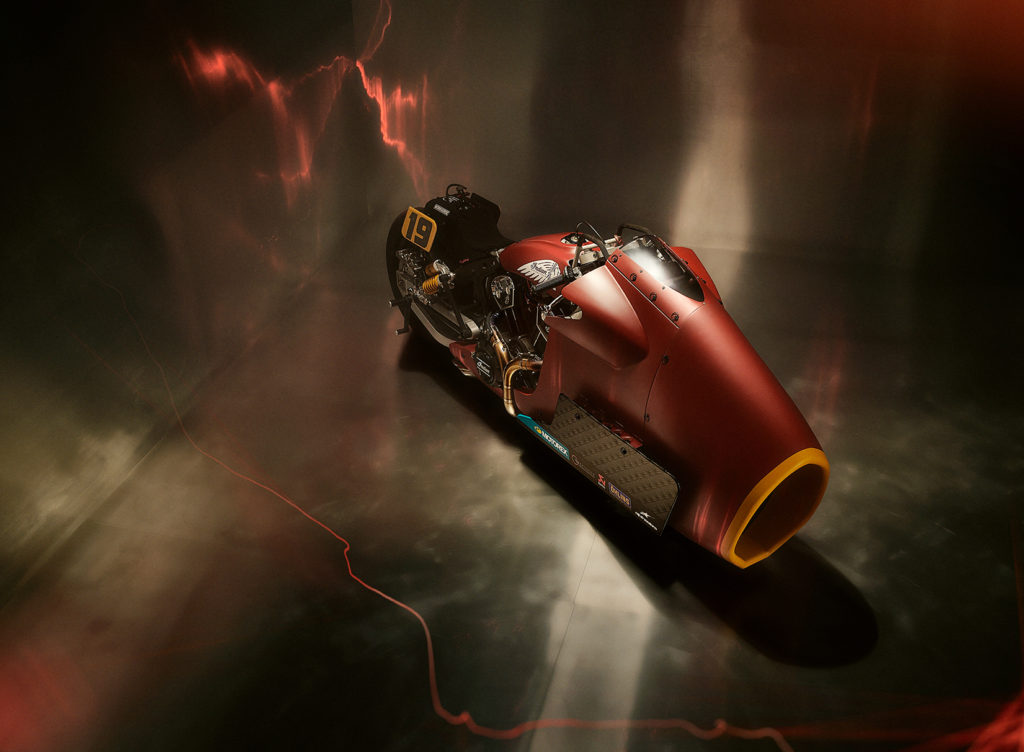 The heavily modified Scout Bobber, nicknamed Appaloosa by builder Brice Hennebert of Workhorse Speedshop in Nodebais, Belgium, looks like a wicked cross between past and future and as Hennebert stated, is meant to celebrate the 100th anniversary of the first Scout Bobber built by Indian in 1919. The bike’s number in the race series will be 19 to honor its heritage, as well as Indian’s history in racing, recently resurrected in American Flat Track by the New Wrecking Crew and their unprecedented string of victories.

Hennebert explained, “I wanted a name that could link Workhorse, Indian Motorcycle and speed. As soon as I discovered that the American horse breed Appaloosa was one of the world’s fastest horses, I knew I had the name for an American sprint bike built by Workhorse. After putting so much into this build, I’m excited to see the reaction to it and I can’t wait to see Randy blast it down the racetrack.”

Mamola said, “I’ve always been a big fan of Indian Motorcycle and I’m really looking forward to racing this amazing creation. It’s great to be part of this project, especially during the Scout’s 100th anniversary. With the Sultans of Sprint being such a unique series, it’s going to be a lot of fun soaking up the atmosphere, meeting the crowds and putting on a show for them.”

It took Brice over 700 hours of work to come up with the finished Appaloosa, and it sports input and parts from titans in racing performance.

Utilizing nothing more than the custom exhaust, electronic upgrades and a nitrous oxide injection system, Hennebert boosted the bike’s output to roughly 130 horsepower, power that gets to the pavement via a chain drive conversion. The bike also sports a quick shift mechanism.

You can catch the races – all of which are overseas, unfortunately – by heading to The Reunion in Monza, Italy, on 18-19 May; the Café Racer Festival in Monthléry, France, on 22-23 June; and the Glemseck 101 in Leonberg, Germany, on 31 August and 1 September.

(A link to the Sultans of Sprint website is not included, because it’s an incredibly annoying website with pop-ups and a never-ending stream of requests to “block/allow” various things.)

Randy Mamola, originally from San Jose, California, started racing on dirt tracks in 1973, when he was just 14 years old. After graduating high school in 1977, he started competing in road racing, winning championships in the US and England before moving to 250 Grand Prix racing and later the premier (500cc) GP class, where he never won a championship but finished on the podium plenty of times and came in second in the championship standings four times in the 1980s.