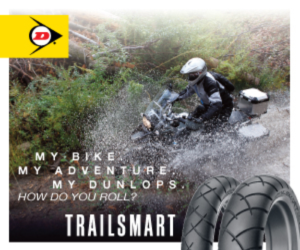 If you watch the show’s Instagram (or Twitter or Facebook) feed, you know I’m at the AIMExpo in Las Vegas right now and completely geeking out about the Indian FTR 1200, of which they have five on display in their booth. They also have a couple available for test rides, so pardon the noise of my sobbing as I resolve to never again attend AIMExpo without riding gear. I’d say “oh, what a rookie mistake,” but this is my fifth AIMExpo and of the three to which I brought gear, I used said gear exactly zero times because work, work, work.

Never again. Next year, I resolve to bring gear and USE IT by demoing some of the available bikes.  Now, speaking of AIMExpo, I’ve got a plan to let you in on everything – in the next episode. Come back for Episode 36, in which we AIMExpo – you’ll hear a discussion of the show with a guest co-host or two and quick clips from the show floor. If you’ve never been to a trade show of this scale, you should give it a shot – I’m sure there’s one somewhere near you wherever you live in the world. They haven’t announced the dates for AIMExpo 2019, but it will be back in Columbus, Ohio, and a date between mid-September and mid-October is highly likely. This coming winter, if you live in the USA anyway, you can take advantage of the series of shows put on by Progressive called IMS – they run from mid-November to mid-February and have events in Long Beach (CA), New York City, Dallas, Cleveland, Minneapolis, Washington DC and Chicago.

Now – time for the show!! By that I mean Episode 34, of course. In the spring and summer of this year, Indian Motorcycle ran a contest to have amateur custom builders put their spin on the Scout Bobber. A bunch of builders submitted drawings, and riders and judges whittled the list down to three builders, who received a Bobber, a budget and a deadline. Everybody saw the bikes at Sturgis – a chopper, a café racer and the bike built by Fred Juarez, which was kind of a blend of Bobber, Chopper and Café Racer. All three bikes were excessively cool, but it was Fred’s bike that won in the end. Check out the photo gallery below to see his amazing bike. (Click on a thumbnail to see it by itself, then click it again to see it larger – it makes sense once you start clicking. These photos are courtesy of Indian Motorcycle.)

As regular listeners know, even before the announcement of the FTR 1200 I was obsessed with Indian, so it was a complete no-brainer to reach out to their PR department and put in a request to interview Fred. Both Indian and Fred were amenable and it all came together in time for Episode 34. Fred is the ultimate mix of passionate motorcyclist and skilled technician, and his obvious joy at having the opportunity to participate in the contest and design and build such a cool bike comes through in the discussion. What struck me the most is the family effort that went into Fred’s bike, and he is quick to thank and credit his wife and father for their ideas and hard work along the way – and his little daughter, as well. The whole process is a celebration of everything we love about motorcycles and the community feeling they create.

The news this time around looks at moves in India being made by Harley-Davidson and JAWA, new bikes unveiled at AIMExpo by Kawasaki and Yamaha, American Flat Track’s 2019 schedule, and an initiative that will see a round-the-world relay completed by a cadre of women riders. Check out the show (stream it here or download it on your favorite podcast app) and the links below for all the details.

Episode 36 (the AIMExpo wrap-up) will be out on Monday, 29 October. See you out there somewhere on the road – or off it! Ride safe.