There are all sorts of racing, and of course all sorts of racers. MotoGP has Marc Marquez and Valentino Rossi. World Superbike has Jonathan Rea. American Flat Track has Indian’s new Wrecking Crew.

While all of those racers (and their compatriots) are at the pinnacle of their sports, there is perhaps no other race in the world that is open to both professional and amateur racers and at the same time allows them to test both themselves and their machines at an unbelievable level like can be done with the annual Dakar Rally.

The level of preparation that goes into a race like the Dakar is something you kind of have to hear for yourself to believe, so it may not surprise you to know that I asked Bill about exactly that – even delving into his fitness routine and nutrition practices. It’s an eminently fascinating discussion from a consummate pro.

One of the reasons I like talking to racers is because while I’m a racing fan, I have no interest in racing myself, so it becomes one of those things that I’d simply like to know as much about as possible – but you can only absorb so much from racing recaps and stories about the rivalries between certain racers (koff Marquez koff Rossi koff koff). To be able to talk to a hardcore rally racer at this level and in this depth was truly a fascinating experience. 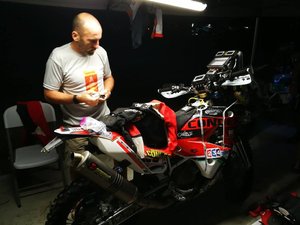 The first season is over the top now, with just two episodes remaining. Both discussions are in the can, so all that remains is to watch the news and put the episodes together. My discussion with Dr. Mark Barnes, clinical psychologist and journalist writing extensively for Motorcycle Consumer News, will be out on 21 May. The season will end on 28 May with an episode featuring one of my oldest friends, Scott Auld, talking about what he’s learned in his first two years of motorcycling. Tune in for both, they’ll be fun!

2 thoughts on “Episode 22, in which we talk to Dakar Rally racer Bill Conger”