I don't want to sound like I'm complaining, but I'm going to complain a bit right here.  I'm going to start by asking you a question, though.  Do you ever read something on social media and wonder how the person that wrote it manages to get out of the house every day without a head wound?  Do you sometimes boggle at how amazingly clueless people can be and still manage to survive day to day?  The announcement about Indian's new Chieftain lineup brought a bunch of those people out this week.  I'm still a bit stunned at the whole thing.  I found myself skipping past several usually good Indian discussion groups after the first day of complaining and commenting.

I've said it before and I'll say it again - it was only a matter of time before things from the now defunct Victory line started showing up in Indian's motorcycles.  Victory held this odd spot in the motorcycle world where they were both looking forward and backward at the same time.  Some of their bikes were as traditional as could be, while others were as avant garde as you can possibly imagine.  When Polaris announced they were closing Victory, I was sure the people who designed those bikes were going to find work at their sister company.  The new Chieftain line proves me right.  The whole Dark Horse thing is straight out of the Victory aesthetic, as are the high-end looks of the Limited.  The new "standard" Chieftain looks like a Victory to me, and I think that's a good thing.  If - like me - you prefer the looks of the 2014-18 Chieftain, you can get a 2019 Chieftain Classic, so that option is still there.

The crazy thing about it all was that not long ago a bunch of these folks were laughing at Harley-Davidson for the Pan America, their 2020-spec adventure bike.  In the motorcycle industry, companies that stand still will quickly find themselves left behind, and I'd bet my meager savings account that the folks at Indian know that, which is exactly why they're expanding and changing the Chieftain line.  The whole situation made me think of the show with Robert Pandya (Episode 15), especially the part where he reminded us that all motorcyclists have to stick together to boost the health of the industry.

Anyway, on to the show. 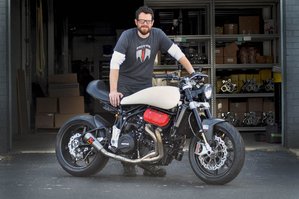 There's not much I can say that I didn't say for Episode 29 last week, since in this episode I wrap up my discussion with Brian Case of Motus Motorcycles.  I've gone over their cease-operations statement with some folks who know a lot more about the financial world than I do and we're all confident that Motus isn't down for the count.  The count might reach 9, but I genuinely believe Motus will be back before too terribly long.  Once they're back, I'll see what I can do about getting an update from Brian or his partner, Lee Conn, about what the immediate future holds for Motus.

We pick up in this episode right where we left off in 029, with a discussion about crate motors.  I'm still humbled at the amount of time Brian set aside to talk to me about his life, motorcycles and company.  I look forward to being able to discuss the next phase of Motus with him and Lee in the future.

In the news segment, I mention a bunch of trade shows, and there's links to all of them below, plus a handful of new links for Motus.  You might notice that I moved the MOA plug (this time for an awareness campaign from the MOA Foundation that I am planning to promote a LOT in season 2) to just after the news - I felt like having both sponsorship minutes after the discussion segment got to be a little long.

It's not too late to listen to Part 1 of my discussion with Brian Case!

1 thought on “Episode 30, in which we continue talking to Brian Case, cofounder of Motus Motorcycles”