In case you missed the most recent blog post, it's time to welcome Dunlop Motorcycle Tires as the show's first sponsor, and exclusive motorcycle tire sponsor to boot.  Dunlop has long been a supporter of the MOA and it's nice to be working with them in the digital realm. Every episode in Season Two will feature a 60-second spot about Dunlop immediately following the discussion segment, and each post about the show will feature a banner for Dunlop like this one

Sometimes it will just be the logo you see above, other times it will be an ad or information about a promotion Dunlop is running.  We'll also be doing some promotions and giveaways that are only available to people subscribed to the email list, so if you're not already on that, it's never too late to sign up. Head on over to tinyletter.com/chasingthehorizon to get on the list. 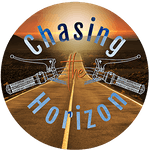 You've no doubt seen the new artwork for the show, but if not here it is for your enjoyment. One variation of the new rectangle banner is at the bottom of the page, and the new show icon (square or circular is over there to the left (or at least that's where it is if I properly formatted it.)

My discussion with Brian Case, lead designer and cofounder of Motus Motorcycles, took place back in July and it lasted a long time - which is why I'm breaking it up into two episodes.  Each episode features over 42 minutes of my conversation with Brian, so you can imagine we talked about a LOT of things.  For example, we talked about how a grievous hand injury got him a job designing motorcycles, and how he ended up in Birmingham, Ala., in the first place. We also talked about the stunning V4 engines that power Motus motorcycles and even why they went with a chain rather than some other form of final drive.  The discussion went from technical to personal and back again.

The one thing we didn't talk about, though, was the possibility of Motus losing its financing and having to abruptly shut its doors. This, unfortunately, is exactly what happened on 30 August.  Brian and his cofounder, Lee Conn, posted a message on Facebook late Friday night announcing the closure and I found out about it when I woke up on Saturday morning. After a couple hours of trying to find out what happened, I decided to shuffle the Motorcycle Manufacturer Month episodes around and put Brian's two-parter first.  Part 1 carries us from the beginning of time through an explanation of what a "crate motor" is, and Part 2 - which will be out on Monday, 10 September - carries on from there.

I'd love to be one of the people who say "Oh, yeah, I planned on getting one of those bikes next year," but the truth is the only way I'll ever be able to afford a Motus is if somebody gives me one.  The base models go for $30,000 and options raise the cost from there.  The premium price gets the rider a premium product, and I can't say I've ever seen a more refined production motorcycle that has the creature comforts, intelligent upgrades (as standard equipment) and raw power that Motus motorcycles have.  Running a small business is tough and things like this happen, but knowing that doesn't make the situation any more palatable.

To repeat something here I've said in other places: it is my sincerest hope that Brian, Lee and the rest of the Motus family find their way forward in the motorcycle industry sooner rather than later, and right now Polaris should be ringing Brian's phone off the hook to get his help in designing the next American-made sport-touring motorcycle built on a fantastic engine (i.e. either the Scout or the next-gen FTR1200 water-cooled V-twin).  Brian's got a lot of skills when it comes to engineering and design, but working with motorcycles is where he should be.

Don't forget to check out Part 2 of my discussion with Brian!

PS If you're not subscribed to AmenMoto's YouTube channel, you might want to click that button. An upcoming episode features yours truly being interviewed by DUG on a ride through beautiful Virginia countryside.

1 thought on “Episode 29, in which we talk to Brian Case, cofounder of Motus Motorcycles (Part 1)”