There are a lot of things I could tell you about my guest for this episode – and I say that not because he’s notorious, but because I’ve known him since high school. Scott Auld and I were both musicians back then (he is still actively so, while I am mostly dormant) and we even played in a rock band together for a couple of years. Life took us in different directions, and his direction was south Florida, where he’s been for 25 years or more.

A couple of years ago, Scott started emailing and texting me with questions about motorcycling. It wasn’t long before he got his first bike – I don’t want to spoil the story for you, so you’ll have to listen to Episode 24 to get the details – and now he’s one of us. We’re all a bit like Scott, and he’s a bit like all of us, which is why I call him a motorcyclist just like you. You can read a guest post Scott wrote for this site with his piece “Beginning at the beginning,” which looks at how he first got into riding.

Scott is also a podcaster, but video is his legerdemain and YouTube his outlet. It was one of his videos that inspired this episode. In it, he talks briefly about 10 or 11 things he knows now that he didn’t know before he started riding. I thought when I saw that video that it would make a great topic for an episode of Chasing the Horizon, especially since I could give Scott a chance to expand on some of his items.

In a way, I really wanted to engage him on what it feels like to be a “young” motorcyclist with just a few years of experience. In some ways, I look at my own life as a motorcyclist and there are times – especially when I seem to spend more time fixing my motorcycles than riding them – when I forget that riding is supposed to be FUN. 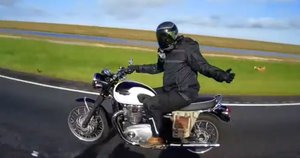 I encourage you to check out Scott’s YouTube channel (link below) and dip your toes into the YouTube motorcycle podcasting community – I think they used to call it “vlogging” as a play on the word “blogging” but I’m not terribly cool any more and I don’t know what the kids are calling that style of content creation.

Now, a bit of logistics. I already made this announcement on the mailing list (you have signed up for that, haven’t you? if not, see the link below) but I’ll make it here as well. After consulting with friends (including Scott) and some podcasting colleagues, I’ve decided NOT to take an extended break this summer. Instead, I’m going to modify my podcasting schedule for the summer and keep putting out fresh episodes. I don’t know how many and I don’t know when I’ll release them, but they’ll be out. I guess when I feel like I’ve got something to say and someone to talk to about it, I’ll post. In the meanwhile, I’ve got some motorcycle travelling planned and I’ll be out there on the roads of the USA.

Thanks to EVERYBODY who has listened to Chasing the Horizon in what I can only call its wildly successful first season. The 23 (now 24) episodes of the show have been downloaded, streamed, heard, whatever you want to call it over 32,000 times. That is simply a staggering number, and I MUST thank ALL OF YOU for sticking with me on this experiment. I guess at this point it’s not really an experiment any more – it’s working pretty well.

The summer episodes will be part of Season 1, so you’ll see the familiar graphics and hear the familiar music for the show at least through July or August. I’ve got a graphic designer working on new logos and my friend Brian Hinton has sent over some new music that I’ll be using once I decide which of his awesome clips works best for the show.

Because my discussion with Scott ran so long, it’s the only thing in this episode. I’ve included links for the news articles I would have told you about – because come on, you gotta get your Royal Enfield news somewhere!!

I’ll see you out there somewhere on the road – or off it! Ride safe and tell your friends about Chasing the Horizon.

5 thoughts on “Episode 24, in which we talk to Scott Auld – a motorcyclist just like you”