There’s a lot going on, and I think this episode of Just the Facts runs a bit longer than previous editions.

If you’re familiar with the book Zen and the Art of Motorcycle Maintenance, you may be pleased to hear Robert Pirsig’s widow has donated his Zen ride motorcycle and a bunch of other memorabilia to the Smithsonian Museum of American History.

Motor sports safety pioneer Bill Simpson has died at age 79 after having a stroke. His recent years were filled with some measure of controversy, but his absence from the industry will be felt acutely. Speaking of controversy, there’s a kerfuffle brewing between Motorcycle Consumer News and the Motorcycle Safety Foundation. It seems the MSF has accused MCN’s editor, David Hilgendorf, of being a big dirty liar. You can also read Hilgendorf’s January 2020 column, the one that started the flare-up, as well as the CPSC complaint at the heart of it all. (I mention Virginia’s requirements for motorcycle licensing in the segment and here’s a link to read what the VA DMV has to say about it.) 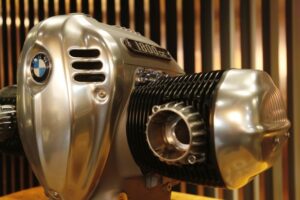 There’s a lengthy monologue about horsepower as it applies to BMW Motorrad’s new 1802 CC Big Boxer engine, and I may or may not take the names of Harley-Davidson and Indian in vain, but it’s time we have a horsepower discussion. I also go off on a bit of a rant about another motorcycle news outlet, so don’t forget to go back to Episode 8 and listen again to when I first predicted Indian would be coming out with an adventure bike based on the FTR 1200 engine.

Jumping into electric bike news, there’s nothing about a new bike, but then again, maybe there is. It seems Charley and Ewan have wrapped up their journey from Ushuaia to Los Angeles on Harley LiveWires. I also stumbled across the story of a German man named Thomas Jakel, who along with his partner Dulcie Mativos, rode a Zero DS-R from Morocco to South Africa for his Africa X project on entrepreneurship. Jakel previously rode a bicycle 5,000 miles from Berlin to Pune so he could build toilets for underprivileged communities.

As always – thank you for listening and we’ll see you out there somewhere on the road – or off it! Ride safe …and visit our sponsors, the BMW Motorcycle Owners of America and Dunlop Motorcycle Tires.