I almost can’t contain myself here. As Linda Richman might say, “I’m a little verklempt.” (Don’t worry, I won’t be dedicating this episode to Barbra Streisand … unless she rides a motorcycle. Anybody know her?)

There are few writers as well known in the motorcycle world as Peter Egan, and it’s not just because he’s been at it in the pages of Cycle World since the early 1980s. Many riders love Peter’s writing because he is first and foremost a storyteller, and we can all find a kernel of ourselves in his stories. Equal parts tragic, comic, informative and self-effacing, Peter’s stories emerged as a series of columns in Cycle World and Road & Track, which is a Cycle World-like magazine devoted to automobiles. (I had no idea, I had to look it up.) 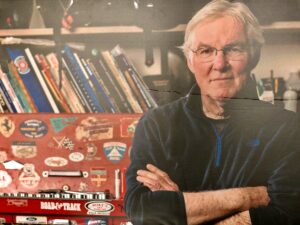 One of the things you’ll quickly figure out about Peter is he’s old school. He loves vintage bikes, of course, but that’s not what I’m talking about. He’s so old school that when I asked him to send me a couple of photos to help promote this episode, what I got back was photos of photos. That’s right – he dug out a couple of old photos and then used his phone to take a picture of each one and send it to me. I was absolutely tickled, because I can’t think of anything more evocative of Peter’s aesthetic than exactly that.

As I said during our discussion, it was difficult not to be a total fanboi and gush about how if it wasn’t for Peter, I might not be a motorcycle journalist myself. He is certainly one of a handful of writers I drew inspiration from in my early days, and even the technical articles I write continue to reap the rewards of my obsessive consumption of Peter’s columns and articles over the years. 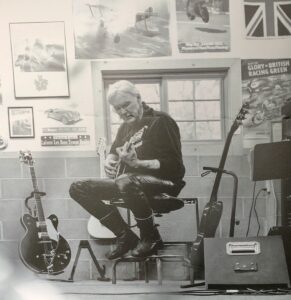 I don’t want to spoil your listening pleasure, so I’m not going to throw down a bunch of links to everything Peter and I talk about, but I will tell you this: If you’ve never read one of the books collecting Peter’s columns, now is the best time to get one. He’s recently published a refinement of the Leanings collection (currently standing at three volumes), The Best of Peter Egan: Four Decades of Motorcycle Tales and Musings from the Pages of Cycle World. It truly is the best of the best, and I can’t wait to take it with us on our next long car trip. If you ask me, there isn’t a book on the market that better coalesces the human experience of motorcycling.

We could have talked forever, but all good things eventually have to come to an end. Maybe I’ll get to catch up with Peter again in the future and we can talk about guitars – we’re both currently infatuated with our respective Rickenbackers, his a 360 12-string and mine a 380 with a maple neck and fingerboard. Maybe we’ll even treat you to a jam session! (OK don’t hold your breath on that one.)

I want to throw out a special thanks to Sue Rihn, a longtime MOA member and the person who made it so I had the opportunity to sit down with Peter for this discussion. It took place during the MOA Getaway in Tomah, Wisconsin, and came at the end of a neat week in which I spent my time working from an Airbnb in Milwaukee while talking to other people for future episodes. You’ll have to stay tuned to find out who they were – but trust me, you’ll dig those shows!

Please take the time to visit the show’s sponsors, the BMW Motorcycle Owners of America and Dunlop Motorcycle Tires. They are the whole reason why we can continue bringing you new episodes of Chasing the Horizons featuring news and discussions with people who make the industry what it is. We’ll see you out there somewhere on the road – or off it! Ride safe.