Two entities entwined, as one owns & operates the other, which makes sense when you know that the MIC works to represent, build, protect and advance the motorcycle industry at large.  The AIMExpo is a big part of that, an annual part as a matter of fact, and it’s almost AIMExpo time.  Intermot wraps up this weekend and EICMA is about a month away, so all the pretty pretty (and exciting) things we’ve seen in Germany, well now many of them are going to be on display in the USA. 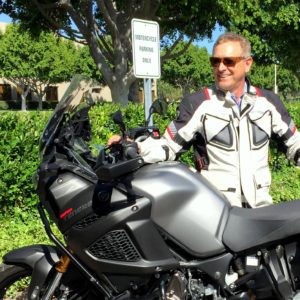 I’ve been to every AIMExpo since 2014, having missed only the first one, and even though it’s fun (I’m not going to lie, it IS fun!), the best part of it is getting to see all the new products coming to dealerships and to get to talk to those who know the most about them, whether it’s a factory rep or a PR person.  Like most of you, I am totally “ate up” (as they say) with motorcycles, and I just can’t wait to learn more more more about what new models, concepts, ideas, and more are coming for the future of motorcycling.

I encourage everybody who rides to attend – and bring a friend who doesn’t ride along with you.  This year it’s in Las Vegas, next year it’s back in Columbus, Ohio.  Flights to Vegas are accessible, and Columbus is within 500 miles of about 40% of all motorcycle dealers in the US – which means it’s within about 500 miles of 40% of all of us!

The reason I wanted to talk to Larry Little is because he both runs the AIMExpo and is one of the MIC’s staff members.  He’s everywhere during the Expo, so talking to him before or after is a reality if you want to have a meaningful conversation, and I’d rather talk to him before to help get people excited about the Expo than afterwards, when it’s already a memory on our calendars.  I also talked to Larry about what the MIC is and does – and learned a lot. I hope you will, too.

The episode featuring my discussion with Indian Scout Bobber Build Off winner Fred Juarez will still be out on 15 October, it will be Episode 35. See you out there somewhere on the road – or off it. Ride safe!