Before you listen to this episode, you should know this conversation happened. 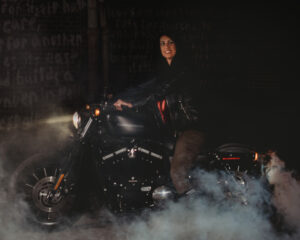 Him: Who is your next guest?

Me: Miranda Young. She does a show called Ghost Biker Explorations.

Him: What? She’s a ghost buster?

Me: Not really, I don’t think, but I’ll be sure to ask her if they’re the same thing.

What I did, really, is a Halloween episode. I mean … we’ve all got to have some fun, right? Miranda was up for it, and I have to say I learned a lot about the paranormal in talking to her.

In addition to discussing her life as a motorcycle rider, I admit I was more than a little curious about the nature of her paranormal interests and investigations. What I really wanted to ask her about, though, was the nature of media from the perspective of a niche market like a YouTube channel – or a podcast.

You can find out more about Miranda and her show, Ghost Biker Explorations, in four places on the web: the show’s YouTube channel and website, of course, plus FaceBook and Twitter, too. If you’re looking for GBE merch, check out the show’s estore.

The gathering Miranda mentions called Phantom Fest (link ceased to be valid) takes place on Saturday, 2 Nov 19 in Lebanon, Virginia. Miranda’s other appearances are on the show’s website, and of course don’t forget the second season of Ghost Biker Explorations debuts Tuesday night, 29 Oct 19, and 9 PM eastern time. You’ve still got time to make it!

This has been a crazy month, and counting the Just the Facts episode coming out in a day or two, October will end with FIVE episodes – the news episode (#65), the AIMExpo 2019 wrap-up and discussion episodes with Rene Cormier, Peter Egan and Miranda Young. That’s what happens when you get a little behind and then find yourself faced with a month with three Mondays in it!

Checking the calendar, I’ve got a reprieve until March on that – I think. At any rate, it’s been incredibly busy for a month I started in Milwaukee. The next discussion episode won’t be out until 11 November, and it will feature Ryan from FortNine.

If you live in the USA, don’t forget to drop your clocks back an hour when you go to bed on Saturday night (2 Nov 19). That means you get a whole extra hour of riding on Sunday! (provided, of course, the weather is bearable where you live)

We’ll see you somewhere out there on the road – or off it! Ride safe.