I’m excited to tell you I didn’t do an interview for this episode. Wait, though, that doesn’t mean there isn’t one. Not at all! Of course there is! Scott Correy sat down with Loryn Cole, the blogger behind RideWell, and got her talking about life as a rider and her year-long project rebuilding a Honda XL250R. You can listen to the episode right now… 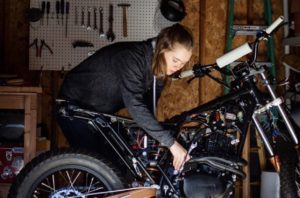 Scott’s wife, Elizabeth Howe, is there too, and we hope to have more contributions from both of them on the show in the future. Scott’s blog is Only Two Wheels; Elizabeth’s is One Girl, One Bike, One World and they both have lots of great stuff. All three of them are on Instagram as well. You might remember Elizabeth joined me on our sister podcast, 200 Miles Before Breakfast, as the guest on Episode 6.

In The News, it’s all about patent filings. I’ve mentioned a few on the show before, but this time we’ve got patent filings pointing to two new bikes from Honda – a production version of the NeoWing three-wheel concept bike and a café racer built around an inline 6 reminiscent of the old CBX.  BMW is in on the patent-filing game as well, and it looks like we might see a sport-touring bike based on their new 850cc parallel twin in the near future.

Honda is looking likely to bump the displacement of the Africa Twin to keep up with Euro5 emissions standards sapping more power from bikes, but that’s almost nothing compared to the photos of the 1800cc Birdcage Boxer Mega Cruiser making the rounds after its debut at a motorcycle show in Yokohama, Japan. 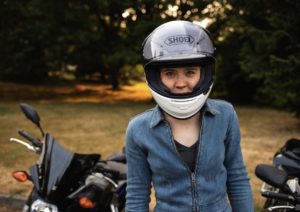 PLUS it looks like Indian is on pace to launch a liquid-cooled cruiser in 2020 with a frame-mounted fairing. People are already calling it a Road Glide killer, but much (MUCH!) remains to be seen. What is really exciting about this new platform from Indian is it looks to be the first time new tech can be traced in a straight line back to Victory, which Polaris shut down so they could focus on Indian. By the way, there was another fire at Indian’s Spirit Lake, Iowa, assembly plant, but it was put out quickly and nobody was injured.

In electric bike news – and you knew there was going to be electric bike news – Zero is sending pro racer Cory West up Pikes Peak on an SR/F. That should be interesting! Also VERY interesting is a quiet announcement last week that Honda, Kawasaki, Suzuki and Yamaha are teaming up to work on electric motorcycle battery design and manufacture. Looks like they’re aiming to become the standardizing factor in the world of electric bikes. That might just be huge – I’ll tell you in about 10 years.

Here’s two bonus links for you – 15 urban legends Harley denies from Hotcars and news about a new 500cc twin mashup between Bajaj & KTM for the India market.