Winston-Salem, N.C., and Seattle. Noting the increasing trend of corporate tie-ups with motorcycle manufacturers, BMW Motorrad will partner with two of the world’s most well-known brands for one-of-a-kind limited edition versions of the iconic R 1250 GS and RT motorcycles. 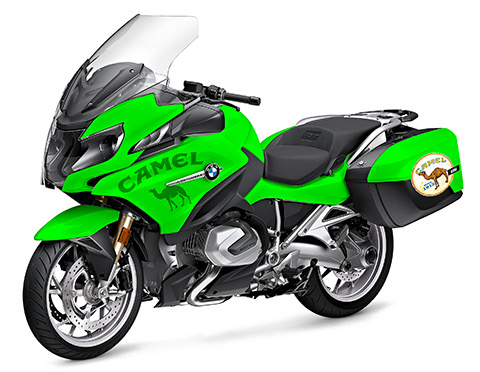 “The RT especially lends itself to this kind of collaboration,” said Dieter Franz-Grüppen, head of Motorrad Communications. “When Reynolds came to us with the idea, we couldn’t agree fast enough.”

RJ Reynolds Tobacco Company, an American manufacturer and current owner of the Camel brand of cigarettes, earns US $75,000,000 a year and their marketing efforts reach tens of thousands of smokers who have yet to begin riding motorcycles.

Joseph Fragnito, president of Reynolds, said, “I don’t know why anybody would voluntarily participate in an obviously deadly activity like riding motorcycles, but hey, who am I to judge? We had to do something, though, since car makers started leaving out ashtrays in the cars. Motorcycle riders are a natural market – the whole world is their ashtray!”

Starbucks Corp CEO Kevin Johnson echoed Fragnito’s concerns. “Starbucks is all about health and wellness, but getting into bed with BMW seems like a great idea. I mean, their cars have cup holders and cup holders were meant for coffee cups. I had our engineers specifically design our coffee cups to fit in car cup holders.”

“Everybody knows the GS lives at Starbucks,” said Roger Peterson, publisher and editor-in-chief of Easy Adventure Outdoors magazine. “I hate coffee, personally, so that’s why I ride a KTM. You never see a KTM in front of Starbucks with all those GSes. Plus, to drink coffee while you’re riding, then you have to wear one of those goofy-looking helmets where the whole face flips up. What is the deal with that?”

The graphics package on the Starbucks R 1250 GS is constructed with special adhesives tested and approved by the Germany Army enabling the colors to stay true after hundreds of hours in parking lots, and newly-designed side panels repel dust and the disapproving looks of French grandmeres. 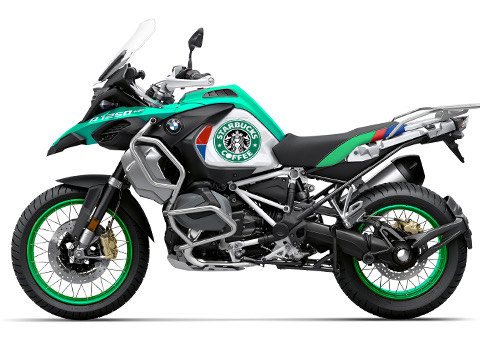 Otto von Mitteln, commander of the German Army’s domestic affairs division, said, “I don’t know how anybody expects us to schützen, helfen, vermitteln and kämpfen without access to both coffee and motorcycles. After all, you can’t go camping without a tasty wake-up cup of coffee, and without a motorcycle, helfen is right out der fenster.”

BMW Motorrad hasn’t announced pricing yet, but expect these special, limited-edition motorcycles to command at least a 10 to 15 percent premium over the already reasonable price of a brand-new R 1250 motorcycle.  Dealers expect these to hit showroom floors as soon as 500 of each model have been ordered.