Howdy one and all, and welcome to Episode 17 of the little podcast that could, Chasing the Horizon.

This is kind of a big episode for me. Not because of anything we’ve done (although you have listened to the show’s episodes over 22,000 times!) but because of who our guest is.  Rod Copes is the head of Royal Enfield USA and he’s the first executive from any motorcycle manufacturer that has agreed to be on the show – indeed, the first official representative of any motorcycle manufacturer we’ve had on at all.  We’ve had CEOs of a number of companies on (and many MANY thanks to them for their time, stories and insights) but in a show that talks so much about the industry, it’s one of my goals to have people who are connected with building motorcycles as guests. Out of all the phone calls and emails I’ve sent, Rod was the first to agree to be on the show. I’m hoping his appearance shows other manufacturers that we’re not trifling around and are crafting a serious, industry-focused show.

At any rate, Rod was a fantastic guest and I look forward to hearing lots more about Royal Enfield in the future. They’ve got a lot of work to do to build name recognition and brand reputation in this country, but Rod and his coworkers are enthusiastic and have what it takes. Be sure to check out your local RE dealer and tell them Chasing the Horizon sent you!

Rod (or more precisely, his marketing chief Breeann) was kind enough to provide us with an exclusive photo of a Himalayan in action to use for a computer wallpaper for Chasing the Horizon’s listeners. It’s set up as a widescreen wallpaper with a max horizontal size of 2880 pixels, but it should scale down OK. (Brandon Lajoie’s photo looks FANTASTIC on my monitor at 2880×1920). It’s stored over on the MOA website, but you don’t have to log in or be a member to access it.  Royal Enfield/Chasing the Horizon Himalayan Wallpaper. (Yes, I realize the CtH logo still has the old URL on it. I haven’t gotten ’round to updating the logos yet. #laboroflove #ihaveadayjob #whereisthatphotoshopfileanyway)

In the news, we take a look at Royal Enfield (briefly, because OF COURSE WE DO!), what’s BMW and Indian intertwined with each other, and news about two famous Italian motorbike riders – Valentino Rossi, who has a long and amazing career going in MotoGP, and Ivano Beggio, who turned Aprilia into a motorcycle manufacturer back in the 1970s.

Episode 18 will be out on 2 April and will feature a discussion with Court Butler, the founder of Butler Maps. Photographer Andrew Pain is up after that, There aren’t many episodes left in this season, which as of now runs through the end of May, so stay tuned!

Thanks for listening, and we’ll see you out there somewhere on the road … or off it! Ride safe.  (PS also happy birthday to my mom!) 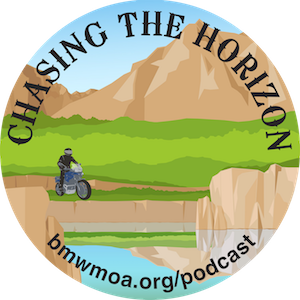