With the sun on my right shoulder, I saw my shadow following me on the road to my left with the end of the mountains in the background. I looked down to grab my camera out of the slash pocket on my tank bag to get a shot. When I looked up a car was coming head on towards me in my lane, passing another car at the same time. I clearly remember the maroon colour and the Chevrolet logo in front of me, but I didn’t see what the other car was. I was in the left lane of two lanes going uphill in a left hand bend with nothing in the right lane beside me. 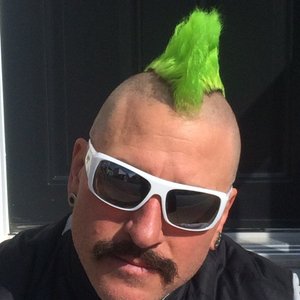 I dropped the camera and put my hand back on the bar and waited. I did not make the instinctive move to go right. I knew I had a second, maybe two to make a decision, who was going to go first? The only place for anyone to go was the empty lane next to me. All of a sudden he swerved and went around me on the right. I held my position as a car on each side passed me at speed; I kept going shaking my head at the idiocy of other drivers, when I looked in my rearview and saw a puff of dirt as he hit the shoulder on the outside but didn’t go off the road. I rolled on.

Fifteen minutes later I gassed up in Port Aux Basques, then went to Tim Horton’s for a coffee. When I came out a pickup truck pulled up fast in front of my parked bike and a guy jumped out and opened a badge in front of my face. The police officer was pretty amped up and said there had been an accident and the driver of the car said I was in their lane. I said, “hold on–let me tell you what really happened…” When I told him my side of the story he quickly calmed down and asked me to come down to the station to give a statement. I said no problem as I still had plenty of time to catch my boat.

I sat down and listened as he told me that one vehicle had gone off the road and into a pond. The driver and some of his buddies came out but one guy didn’t. The interview over, I left and caught the ferry to North Sydney.

In the morning after trying to catch a few Z’s in one of the sleeper chairs on the boat, I heard a woman in front of me on her phone talking about a kid who’s always in trouble being in trouble again. I realized they were talking about the accident the night before and was tempted to comment but walked away to disembark instead. When I got to my friend’s house in Fredericton later that day, I called the officer back to see if there were any more details. It turned out the two cars were street racing, a bunch of kids. When the car that went around me pulled back into his lane, he clipped the other car and went off the road into the pond. Unfortunately for the driver of the car that went around me he was 22 and he just killed his buddy. There would be big consequences. He almost killed me too.

My girlfriend and I spent a fun week on the back of the bike seeing friends at CroMag, riding up Mt Washington and camping on various islands on the way east through New Brunswick. We did a little surfing near a friend’s place in Nova Scotia before I dropped her at the Halifax airport.

I didn’t dwell on how close I came to dying on that trip, I’ve been close to death before in the pursuit of fun in high-risk sports. I moved on to enjoy life as it came along and continued putting miles beneath my tires.

The odd time I do think back to that particular day I remind myself that when the shit hits the fan, rule number one is “don’t panic!” It might just save your life.